Know All Your Enemies, We Know Who Our Enemies Are 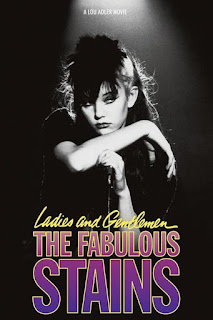 Something shocking happened when I posted to Facebook my essay about the necessity of organizing a societal response to the existential threats that plague us. It got lots of comments, and almost all of them were from people who are in favor of a human-less Earth. One idea that came up a couple times is that humanity is a cancer on the body of the planet, and that if we were to slide into extinction, it would be no big loss.

I found that simply mind-boggling. And really I feel a little sick about it. I had no idea that this virulent strain of nihilism masquerading as "enlightened thinking" even existed, not really, even though my friend whose comment inspired the original piece told me I was going to encounter a lot of it. Boy, was she right! Anyway, here are all the comments. A lot of accusations were made that I was angry, sarcastic, unwilling to listen to other points of view. That's...pretty accurate, actually, but honestly I'm surprised I managed maintain at least a veneer of civility, because what I was feeling was appalled contempt. These people were so cavalier about the end of us all. Could they possibly really feel that way? Some of it was hopelessness, sure, but some of them seemed to speaking from what they considered to be a place of spirituality.

It was uncanny, and I thought once again about the apocalyptic nature of many of my visionary experiences, the indications that we are in the endgame for whatever supra-dimensional strategy mystery Ma's Children are playing. Resistance is strong, so strong, and it's infecting everything and everyone. There's madness down that road, if I think about that stuff too much; we're in the Chapel Perilous now, for sure, and so I need to be careful. Yet at the same time, understanding the scale of this conflict and what's at stake seems to be shoring up my resolve, and that has to be a good thing.

Okay, about the title of this post. Obviously it's a Neutral Milk Hotel reference. And I'm not saying that any of these people are my personal enemies. But this kind of nihilistic apathy? Yeah. That's pure Resistance. Resistance is the mortal enemy of us all. Even the ones comfortably sinking into its abyssal embrace.

The essay ends, and then the comments started rolling in: 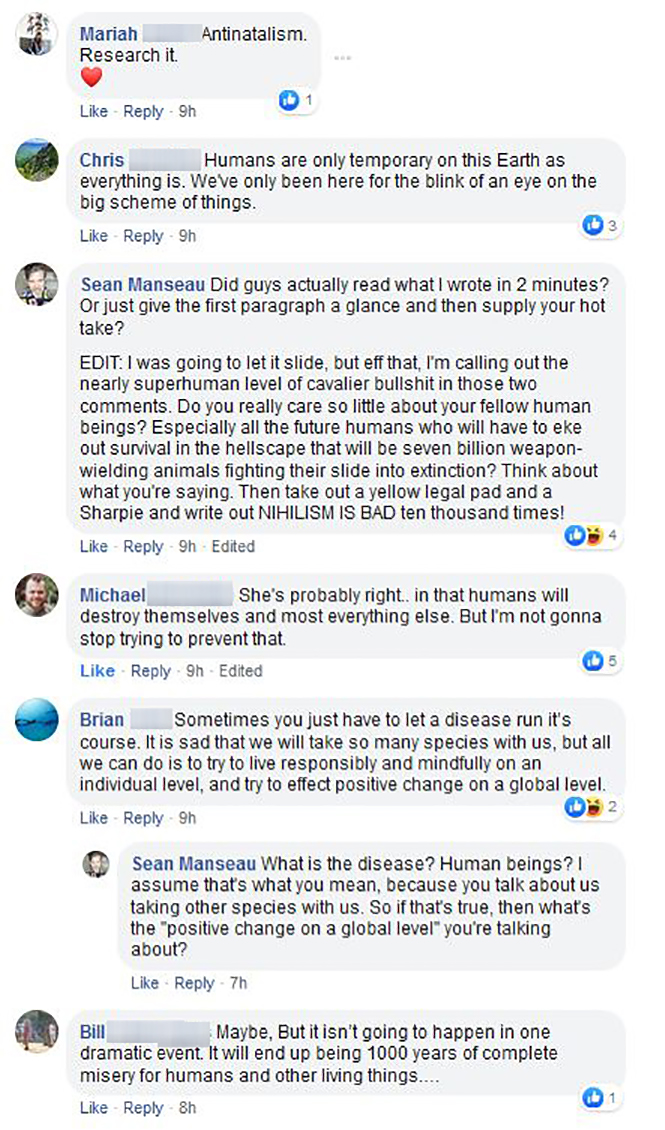 When at first faced with the woman promoting antinatalism, and then the guy basically shrugging at humanity passing away, I simply pointed out that there was no way they could've actually read what I'd written in less than two minutes. Implied is the idea that maybe if they had, they wouldn't have made such stupid comments. But as similar remarks started sprouting in thread, I went back and called them out.

In the future, I might look back at this exchange as an inflection point. I've been thinking a lot about how to bring my ideas before the world, which in this day and age, means marketing myself. Pa Dammit needs to be a character--but what is he like? I've been thinking that maybe, instead of pretending to some sort of pseudo-Buddhist detached calm I don't feel, I might as well lean into this idea of punk rock mysticism. A real prophet is a social critic. S/he calls out what they see as wrong with their culture. To do that, you really can't pull your punches.

I tried to use a blend of sincerity and what I hoped was biting wit. People read as simple sarcasm, though, and maybe it is. But that's what I'm going to do from here on out: call bullshit where I see it, talk with those who push back, and make fun of them in as subtle a manner as I can manage. Hopefully I'll get better with practice.

None of these people impress me as anyone I would like to be friends with, so I don't particularly care if they get offended...not as long as they are promoting values that are so antithetical to my own. Different is fine; diametric opposites--I think--need battling. Is that right? I'll have to think about that some more. I think it is.

Let's take an easy example: civil rights. If I believe all people should have the same rights, no matter what the color of their skin, and someone else says, "That's fine, except for those guys over there," then that's not simply a matter of different points of view. That's a value that is a danger to the kind of society that I want to live in. I am obligated to speak up and point out why they are wrong. 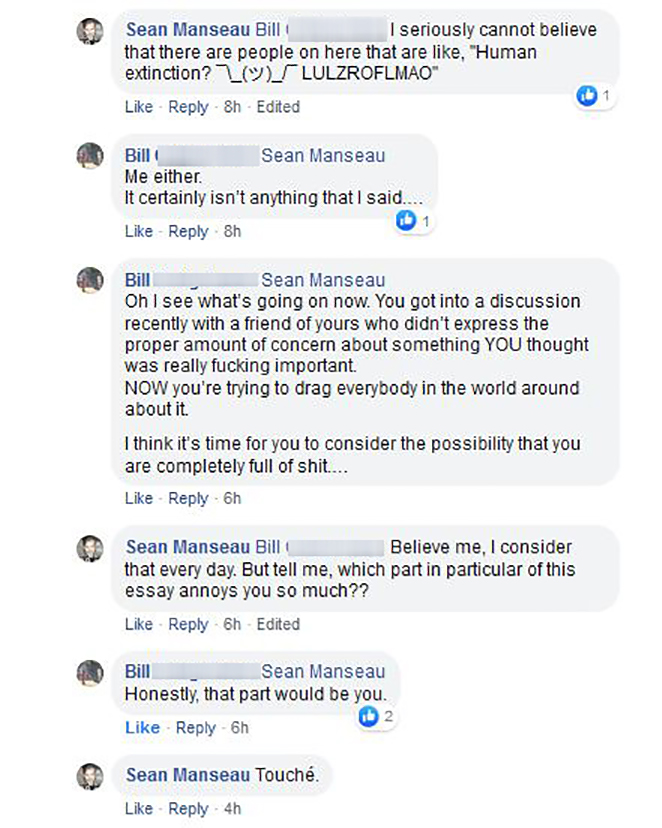 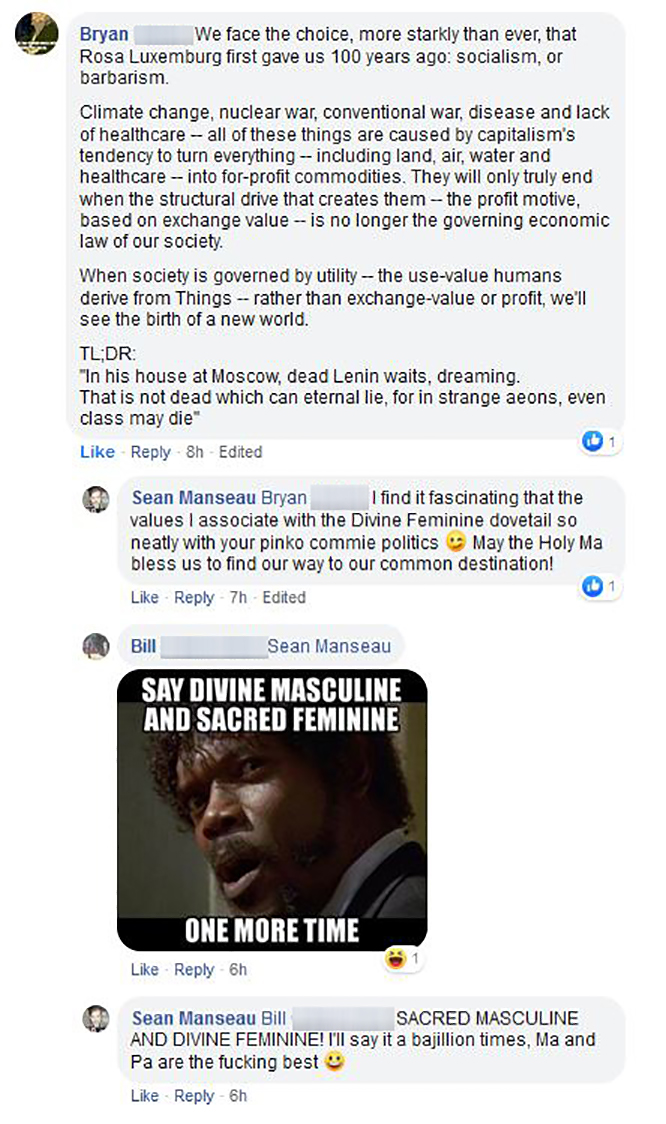 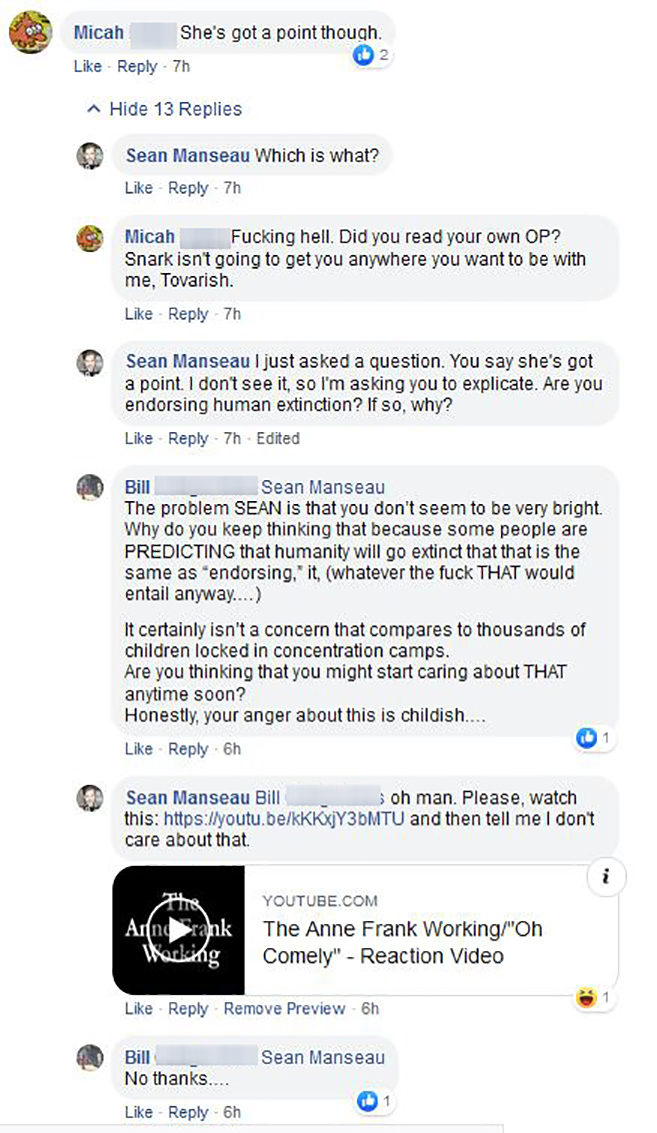 Okay look. I have to admit Bill may have had a point here. Although someone above make an oblique reference to humanity as a disease, nobody had explicitly said HUMANITY IS BAD AND IT SHOULD DIE. Is saying my unnamed friend (who didn't say exactly what I attributed to her, I adjusted it slightly to help set up my argument, but that was the general gist) had a point--that maybe it would be best if humanity went extinct--the same thing as endorsing extinction. I'm still inclined to say yeah, at least functionally. I think at this point I was a little overwhelmed that anyone anywhere could possibly be sanguine about a human die-off. I got a little het up. Again, I'm not trying to maintain equanimity. That's not part of our program. I want to feel things strongly. What I don't want is to allow those feelings to compel me to act in ways I later regret. But I don't regret my comments here at all. Bill insulted me ("You don't seem to be very bright"), and I didn't let it bother me at all. Five points for Gryffindor! 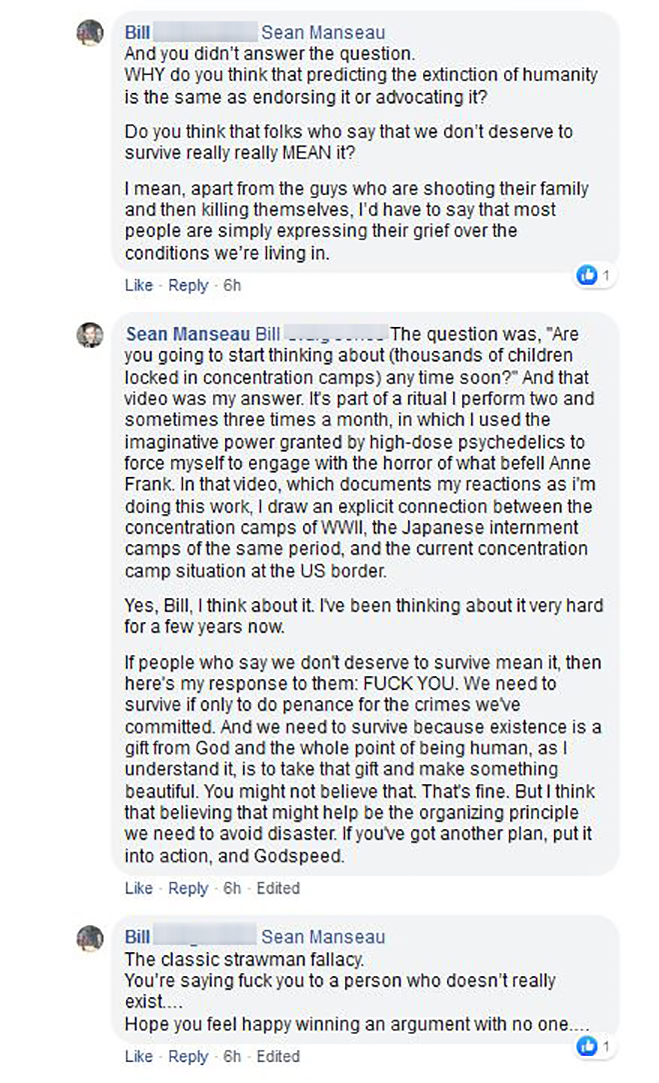 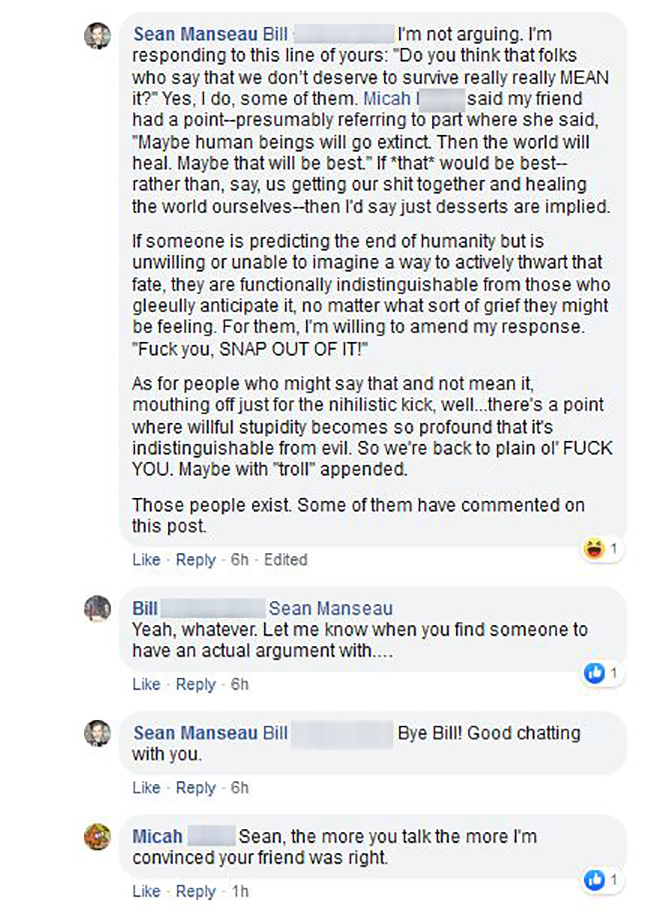 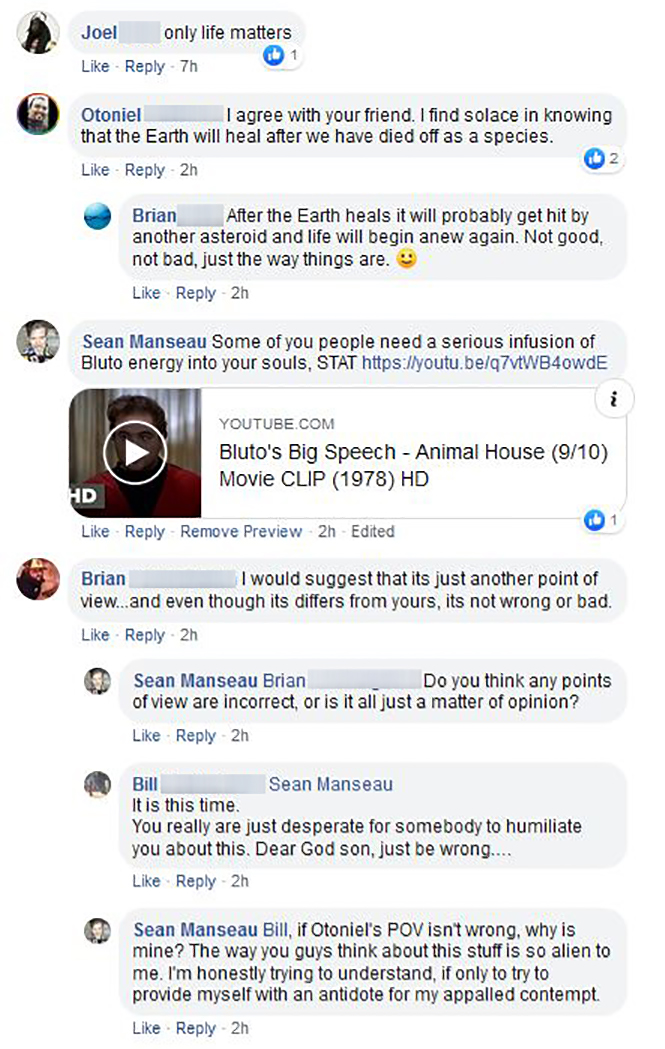 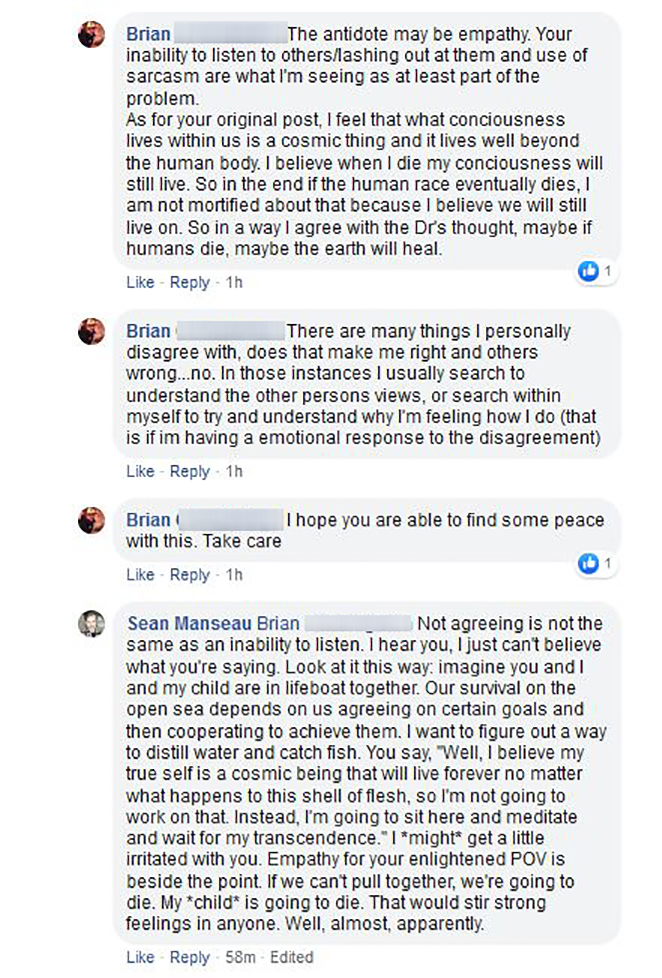 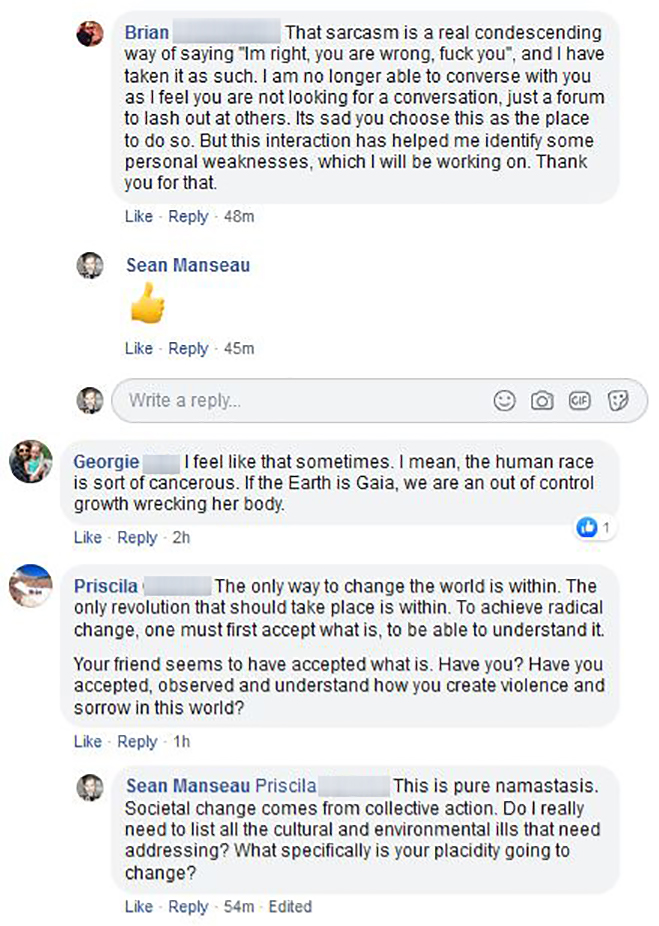