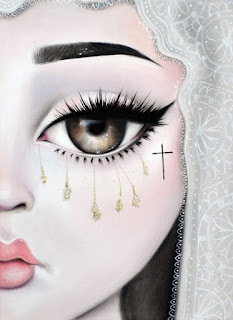 Another Reddit exchange. Someone commented, "Why do you have a picture of Anne Frank? That is inappropriate. Having a picture of her may work for you, but you don't need this material to achieve your aims. You can imagine the archetypal Jewish laborer of the time and the pain they suffered. Or you can imagine any other suffer of tragedy and feel the same way. Choosing a popular historical figure that just so happens to be a little girl is creepy and inappropriate. Let Anne sleep in peace already."

Stalin said, "One murder is a tragedy, a million murders is a statistic." It's impossible to think about killing on that scale. Anne was chosen because in trying to own the great sin of genocide, all you can do is think about one face, one name, one story you know as well as if she told it to you herself. Which Anne did, in "Diary of a Young Girl." It's a story we all know. To confront the collective Shadow by meditating on her fate is to make a tiny partial repayment against her fate and the fate of all the others torn from their lives in such a horrendous fashion.


The spirit who incarnated as Anne Frank has long ago moved on to bigger and better things. What matters now is the archetype her image can represent. Mythically, she is the Martyred Innocent, a sacrifice in a game our highest selves are playing to redeem the universe. That's awful, but it's true. Let's hope they win, and it'll all turn out to be worth it. Otherwise, it's back to the Stone Age or maybe even extinction for us.