Songs With Lyrics vs. Instrumental Music in the Psychedelic Experience 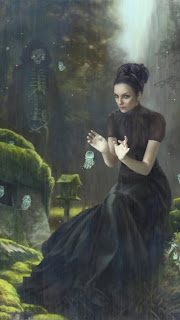 Psychedelic guides have traditionally discouraged the use of songs with lyrics in favor of instrumental music. To quote an article by Ilsa Jerome on the MAPs website:

Most of the music used in psychedelic-assisted sessions is instrumental, and when there are vocals present, they are in an unfamiliar language. This is to make sure that the music is not conveying a specific meaning or telling a specific story. The music should also be culturally appropriate, making it easier to follow and convey emotion rather than drawing attention to itself by use of too 'strange' or jarring melodies or tones.

My approach flies in the face of this. In phonomancy, conveying a specific meaning--or put another way, a specific emotional state--is exactly what the programmed music is supposed to do. Why? Because a phonomantic rite is not a free-flowing experience. It's a narrative experience.

A narrative experience is a sequence of specific emotional states. In a phonomantic rite we intentionally enter those states because we want to a) increase our capacity to feel them, b) explore their aesthetic potentialities, and c) witness the visionary effects the emotion causes.

This seems so opposite of the standard therapeutic model that it's either utterly wrongheaded, or complete genius. At this point, honestly, it's hard to tell. I know it's working for me, and I think can justify it with a well worked-out theory. At this point what I really need is the opportunity to present these concepts to professional psychedelic therapists working in the field, to see if they're really so alien to work that's been done, and to debate if people reject it. The best way to sharpen one's thoughts is on the strop of other people's skepticism.

With all that said, yesterday I came up with an analogy that illustrates why I think songs with lyrics are able to more clearly communicate more focused emotions than instrumental music.

During my ceremony two Fridays ago, I was having a rough time during the Astronoid song "Up and Atom." Hitting a lot of Resistance. The fear and the depression were rising. But I fought through it, and when it passed I felt an inchoate excitement. It was a lot of energy, but it was just kind of hanging out, not doing anything.
I had been concentrating with my eyes closed, and at this point I opened them, just in time to see, in the video I made, footage of the Death Star exploding and the Millennium Falcon and X-wings zooming away. I've seen that movie at least a dozen times, maybe twice that, and my emotional response to that scene is highly conditioned: it makes me feel a fist-pumping sense of triumph and relief.

So, confronted with that image, I reflexively felt those feelings, and those in turn gave shape to all that energy I was carrying. The energy amplified that sense of triumph into pure exultation. It felt fucking amazing.
I maintain that's what lyrics do. Like the scene of the Death Star exploding made the moment for me by creating a narrative container for that cathartic release, lyrics focus the emotion inherent in music and make it specific--kind of like a magnifying glass focusing light into an ant-destroying point. With emotion, as with light, concentrating the same power into a smaller and smaller area increases intensity. It's just math: I = 4πr ².
Songs with lyrics focus broad emotion into narrative situations. We unconsciously compare our own experiences with these situations, and if they are similar, we connect to them, and take the full blast of the charge they carry.

It's not that it's better than instrumental music. It's that it makes the emotion more accessible to more people, and for people to connect over shared feelings. I guess theoretically a classical music aficionado could find more solace in Mozart's Requiem than "How Can You Mend a Broken Heart," but if his two buddies also got dumped, and they wanted to put on a record to enjoy their misery together, unless they are all classic music nerds, odds are the Rev. Al Green will be the better choice.

I want to add one more thing, on a related note: lyrics in songs can be repurposed. That is to say, when you sing a song in an altered state of consciousness, it effectively becomes a magic spell. In the Tool song "46 & 2," the climatic C section goes,

Stretching up and over me

Hoping I can clear a way by

Step into the Shadow

And coming out the other side

Step into the Shadow

You can just mindlessly sing along, or you can sing the words as a statement of intent, a proclamation you are making. If you experience them that way, you are, in that moment, a sorcerer working magic. Magic in the sense of an alteration of reality in according to one's will, and reality in this case being your own consciousness.

This is simply not available with instrumental music.