191113 - Ceremony Debrief - The StereoMyth, the Anne Frank Working, and the Sacred Marriage of Jesus and Mary - Part Two 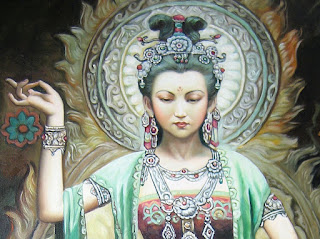 As ever, the early part of the evening was rough. By the end of the Invocation, I was already experiencing invasive thoughts: This was a bad idea. You shouldn't be doing this. Give up. Go lie down. The Fear was on me all the way through "Used for Glue."

I know this because in this ceremony, I resumed an old practice, with a new twist. In between songs, I paused to talk to the camera. I described what had just happened, how I was feeling, how I was coping. But usually I do that in the semi-dark; this time, for the commentary, I turned on the light box! In the videos that document my evening, I am standing brightly lit. I am, as advertised, completely lucid, but it's obvious that I'm exerting a tremendous effort to maintain my composure. I'm scared shitless, but I'm still smiling.

(Note: I cannot believe how bad my singing is when I've got earbuds in. Watching the scene in Tarantino's Death Proof when the cheerleader character is unself-consciously singing along with her iPod as Stuntman Bob ogles her from the passenger window, I remember thinking, "Wow, she's out of tune!" Barely out of tune, really, and now I understand she must be an awfully damned good singer to be able to even approximate pitch while wearing headphones.)

The first significant vision of the evening came toward the end of "46 and 2." During the instrumental bridge that heads into the song's outro, which goes, "See my Shadow changing/ Stretching up and over me/..." and etc., the quality of my "inner sensorium" changed.
(I really need a better term what I'm seeing in my head during ceremony. "Mental experience"? "Cognitive cinema"? "Vision space"?)

With my eyes closed, I had been seeing what I called in Part One the "quotidian fireworks" of the psychedelic experiences--the geometric figures, the crashing waves of consciousness. But now it was like I was dreaming while wide awake.

What I saw was barren hills in an arid landscape--near desert, like Palestine. They were covered with standing figures in robes, and (I think) topped with crosses. Everything was on fire. And then the cross changed into the phonomancer disc symbol, the as-above-so-below double-headed arrow piercing the sacred spinning black circle. Aflame, it rose into the sky, a beacon. With that vision came a message: Pa, be who you are. You know who you want to be; go be it. Don't let the fear stop you. Be bold and create this thing you know is spectacular and will be so valuable to people.

The message was not composed in words, but a quantum of specific emotion. It was a shockwave of meaning. And it's a perfect example of the weirdness of this entire enterprise, another event that simply demands further explanation.

You may have had a dream that woke you from sleep. It was incredibly vivid, and though it may have been deeply strange and hard to understand, you know it meant something. That it was important. You think about it for the rest of day. If so inclined, you do dream work with it, trying to clarify why it hit you so hard.

That's what this sort of visionary experience is like. I didn't will myself to have it--it arose spontaneously. It was delivered. Maybe the drama of the song summoned it? Either way, there it was, with its archetypal images, and its unmistakable message: phonomancy is the next step. The phonomancer disc as beacon burning in the sky--that's not too hard to interpret, is it? Especially not with that emotion that accompanied it.

No, that image conveyed a definite message. But why? Where did it come from? Did someone send it? I don't know the answer to any of those questions. But I can tell you that it's of a piece with many other visions I've had. What's so compelling is that they are consistent. They form a coherent mythology and cognitive model. If one was to get visions from the Goddess delivering order to found a new religion, this is exactly what it would look and feel like. So even as I sit here thinking, "This is effing nuts," another part of me has to say, "You cannot deny that these things are happening to you. You are getting these messages. What happens now hinges on a simple question: are you going to decide to believe it, or not?"

I've written extensively about this issue. Some of the time I really do believe it. Most of the time I'm not sure, but I've decided to continue to conduct myself as if I do. And then there are days--not too many, thankfully--when I don't believe it at all, and I'm horrified to watch myself throwing my life away, alienating myself from any hope of a stable career or intimate relationships.

Needless to say, those days are extremely uncomfortable. But as I said, there aren't too many of them, and they seem to be coming less often. Because here's the deal: the only way this thing could possibly work, that I could convince some people to try my methodology, and the Shamanic Cabaret becomes a hit, and people start making their own Phonomantic Rite, and this thing actually, really takes off and changes the fucking world, the only way that can possibly happen is if I believe it myself 100%.
Early this year, before I left Seattle, I had a vision during meditation. Not an etheagenic vision. I was just sitting there, practicing "looking" with eyes closed, when suddenly I got an image of myself standing at the edge of a vast canyon.

On the far side of the chasm was a shining city, all chromed Art Deco towers and temples and flying cars. It was Metropolis, the New Atlantis, the bright future for humanity I've seen in my ceremonies. It was where I wanted to be, where I needed to be. It was safety, it was home, it was the ultimate treasure, the reward for all my fearful exertions.

In the sunless bottom of the canyon was everything I was afraid of: looking like a fool, looking like a lunatic, living impoverished, being without love or friends for the rest of my life. Wasting my life, basically, on something any rational person could see was delusions brought on my stupid indulgence in mind-altering chemicals. Harrowing loneliness, meaningless drudge work, living paycheck to paycheck, for decades. These are my greatest fears in life.

I was given to understand that there was a way across that gap from where I was to where I wanted to be. An invisible bridge, rather like the one in Indiana Jones and the Last Crusade that connects to the resting place of the Holy Grail. Once Indy makes that first step into the abyss, the bridge is revealed, and he walks across with increasing confidence.

My bridge was a little different. It was a suspension bridge, and each slat only came into existence only at the moment when your balance has tipped so far forward there is no going back. There is an awful moment of spiraling terror as you think, "Oh my God I'm falling I'm going to die!" as you are plunging to your own bespoke hell. Then you find solid support under your foot and you exhale in explosive relief. Oh but hey, you're not done. In my vision, one leap of faith isn't enough. You have to face terror over and over again. A hundred times or more.

I quailed. "It's too much!" I cried (in my head). "Nobody has that kind of courage! It's superhuman!"

Well, came the response, you want to be a superhero, don't you?

Fudge. They got me there. I do want to be a superhero. Not wearing a cowl and cape mind you, or capable of feats of telekinetic invulnerability (although that would be cool). In my belief system, in my cognitive model, being a superhero means being able to suffer stress others cannot tolerate. To suffer it with style, aplomb, good humor. Why? Because it makes you stronger and more beautiful in the eyes of the Goddess. And because the world needs you to.

Okay. That's it for Part Two. There's a lot more to come. That's one of the difficult things about this work--these ceremonies produce so much material, so much stuff that needs to be unpacked for both personal and potential academic interest, I could easily spend ten hours a week or more reviewing the videos and writing about it. And I've got so much else to do--like, for instance, singing practice, which I'm heading to now. See you soon.