A Letter to My Dad 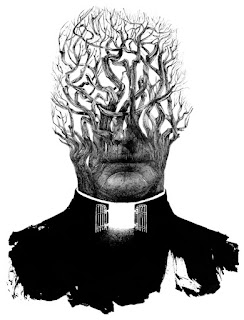 Our phone conversation was interrupted, and I wanted to finish explaining that video you asked me about, because I think it's important.

The ceremony I've developed is in three parts: a rite of transformation, a rite of purification, and a rite of atonement. Each prepares you for the rigors of the next. Working with the song "Oh Comely" is the first and hardest part of that atonement rite.

What you're witnessing in that video is me paying penance. Penance for what? For the godawful genocides of the last five centuries. Why am I doing that? Because my visions indicate that it's our failure to come to grips with the evils we've collectively committed that has brought us to the brink of civilizational destruction and perhaps human extinction.

It's more complicated than that, of course, but that'll do for now. And so, to face up to what's been done and try to make things right, to buy us a future, I've devised what you see. I put myself into an altered state of consciousness, arouse in myself a high degree of emotion via the ritual use of song, then focus that emotion on images contained in the videos. Internally, I'm also imagining myself alongside Anne Frank as she lives out the story recounted in her book, and then also the fate that befell her.

It is a terrible, terrible experience. I feel gut-wrenching horror, shame, sorrow, pity, regret. I beg for forgiveness. That "grimacing" you saw is what penance looks like. Real penance, not just mumbling your way through some Hail Marys. Real penance is harrowingly painful. As it should be.

There's actually a whole mythos behind the practice. It's detailed in my book, and explained in the beginning of that video. But since you read my book and watched the video and still say you don't get it, I don't know what to think. Maybe you don't want to get it. You really can't be trying that hard to understand. And that's fine. I can't compel you.

Anyway I made that video to show people how to work with that song. How to get into a state of  heightened emotion which precipitates powerful visionary experience, and how to then do some heavy, heavy Shadow work. During rite of atonement you're working with the transpersonal Shadow, because you've already done a lot with your personal Shadow in the first two parts of the night.

My hope is to someday gets dozens, hundreds, thousands, millions of people to do the same. Why? Well, for one thing, the Anne Frank Working doesn't begin and end with this song. It goes on to hit a note of truly transcendent beauty and a message that we will all be delivered. That journey from darkness to light is incredibly cathartic and energizing.

In addition, I think that teaching and encouraging people to grow up enough to confront what is evil in the world and in themselves in such a visceral way will change our society and perhaps pull us out of our civilizational nosedive.

That's the idea, anyway. It's a good one. It's original, and daring, and people find it scary, so you know there's probably something to it.

I've said it once, I'll say it again and again: THE OLD IDEAS ARE DEAD. Your religion no longer has the power to transform on a large scale. It's grown too corrupt and has too many crimes to answer for. People hate the word "church," did you know that? They hate the word "religion." All priests are suspect. We've got Christianity to thank for that. The mass-murdering and pedophilic Catholic Church, and the utterly corrupt and amoral and perverse Evangelical movement. Christianity had its chance to save the world. Certainly it did a lot to move the human enterprise forward, but it's dead in the water now, it's salvific mission all but forgotten. It's time to make room for something new. Something that will change the world and guide us into the star-bright future we're designed to inhabit.