A New Metaphor for the Trinity 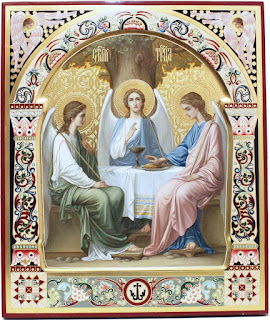 This isn't perfect, but hopefully it will get better with time and thought.

Imagine you are watching a movie on your tablet.

Pa, the masculine aspect of the Godhead, is the information of which the movie is composed, the all-the-sand-grains-on-all-the-beaches-in-the-world number of 1's and 0's, and all the abstruse patterns and operations that organize and control the qualities and position of every pixel on the screen.

Ma, the feminine aspect of the Godhead, is the story conveyed in the images and sounds constituted from Pa. She's also the psychology of the characters, the situational tension, the subtext of the dialogue, all the aesthetic decisions involved in creating the movie's costuming, set dressing, lighting, editing, etc., etc., etc.

Kid A, the Self, is the node on the Divine Network where Pa and Ma combine to create an experience of meaning and aesthetic emotion.

In the visions that accompany the Anne Frank Working I often see Anne, whose corpse I’ve been cradling, come back to life and run into the arms of the Holy Ma. She beckons the Holy Ma to come closer. Ma bends down and Anne whispers in her ear. Then they both look at me and grin like conspirators. Anne, I realize, has just told the Holy Ma she thinks I’m cute.

Recently this image has been accompanied by a message: Be the man Anne deserves when she grows up. That is to say, I am to strive to be worthy to love this young woman who was ripped from life.  She had everything taken from her; she deserves compensation for her fate, deserves every happy ending in the world. It begs the question, Who do I need to be, to be Anne Frank's imaginal True Love? Someone far kinder, more honest, more patient, and more fun than I am now, that's for sure. I'm working on it.

What if we all considered that question, and held ourselves to that standard? Your gender or sexual orientation doesn’t matter. Because the Murdered Innocent could be gay Anders, or straight Antoine, or sapiosexual Annalise. In that unthinkable throng of three hundred thirty murdered millions there was a young person cheated of life who deserves a Perfect Love. If they loved you, imagine who you’d have to be to settle the scales of Cosmic Justice. And then do everything you can to be that person.

That idea was accompanied by an image. You can always tell which inspirations come from the Holy Ma herself, because the mental pictures are incredibly vivid, colorful, and they sparkle. That's the best way I can put it. I saw a silver locket, and inside it was a picture of Anne. I was instructed to wear it as a reminder of who I'm trying to become, and why. Servant of the True Will that I am, I went right out to buy one, then printed out a photo of Anne that I pasted inside. I wear it every day--it's an identifier, a badge, and a promise: I'm a phonomancer, and I'm sworn to save the world. I hope that someday I'll see lots of people sporting similar jewelry for the same reason.