I said, "A belief system is a set of tools one can use to craft one's experience of the world." 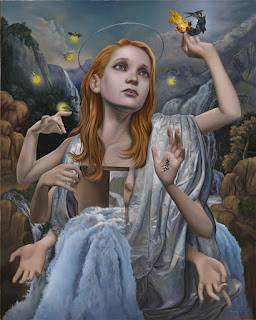 And my friend asked me, "What might a few of your 'tools' be? And used for building what specifically?"

To which I replied, "Hmm, good question! A few tenets of the belief I'm espousing might be something like..."
I'm not claiming this is this literal truth. It's a very useful metaphor, however, a way to image something that is literally beyond our ability to think about.

It really comes down to, what kind of world do you want to live in? A little one with hardscrabble meaning and nothing to look forward to but the grave, or a vast one in which the God/dess is your eternal playmate throughout all time? As the great poet Neil Peart said, "If you choose not to decide, you still have made a choice."

As far as what you can build with this, well...

Fully self-actualized human beings with cognitive superpowers, basically. People who crush it on every level: intellectually, physically, spiritually, creatively. And if you're able to create enough people like that, you might be able to pull our civilization out of its current apocalyptic death spiral.

As I say in one of my videos, we're facing the greatest collection of existential threats in history. It's an all-hands-of-deck situation. If you've got an idea or a plan to save the world, you're obliged to put it into action, no matter what the personal cost. Here's mine.